Like in Wii Sports, you first need to customize the character you use throughout your sports career. However, the removal of skill points has admittedly dampened the offline single-player experience quite a bit. Wiis have returned and they’ve also added a whole new character creator, packed with customizable apparel. Nintendo Switch Sports offers 6 different sports games available in single-player, local multiplayer, and online multiplayer. Admittedly, some games are more fleshed out than others, but they’re all designed well and can be surprisingly addictive, even in single-player. These sports activities are Soccer, Volleyball, Tennis, Badminton, Chambara, and Bowling. Soccer was definitely my least favorite.

It’s not intuitive like the other modes, and is the least realistic, playing like a poor version of Rocket League. There are three modes for Soccer: One on One, Four on Four, which is really 1v1 with AI teammates in the mix, and Shoot, which makes use of the Switch Leg Strap. It’s fairly imbalanced, as the balls are way larger than players and ignore all the laws of kinetic energy and basic physics, passing through players’ hitboxes when shots are taken point blank and shooting the ball with startling accuracy no matter its trajectory. Yes, this is a party game, but all the other sports have some semblance of realism. Part of their charm is relatability, something this mode does not possess.

It’s still fun, of course, but definitely leaves a lot to be desired compared to sports. Playing the hardest AI in 1v1 was tricky. While they were very basic and predictable, their unnatural reaction speed and accuracy forced me to rely on exploiting the AI’s programming flaws. Now if there’s one thing Wii sports taught us, it’s that motion controls work quite well in Tennis.

Unfortunately, Nintendo took this the wrong way by removing Gold and Baseball and adding Tennis, Volleyball, and Badminton. Obviously, sports play out very differently in real life, but the same can’t be said in Switch Sports. Gameplay-wise, Tennis, Volleyball, and Badminton are among the best sports here though, there’s no doubt about it. Tennis is played as a duo and is more refined than the original one from Wii Sports. Also interesting is the co-op feature, which adds a very nice dynamic of teamwork that I haven’t seen in other games.

Knowing how to utilize the up and back positions is something you and your teammate both have to learn when playing together, covering for each other’s weaknesses while trying to gain an advantage over your opponents. In single-player, you’ll be controlling a “ghost” of your character, swinging both rackets simultaneously. Like Tennis, Volleyball is also cooperative. With how the jumping and blocking work, volleyball can be a little challenging for the intended audience but is a solid mode altogether. And teamwork, of course, plays a lot like Tennis. Out of these three, Badminton, being a fast-paced 1 v1 mode, is probably my favorite. Matches can get quite intense here, as you’ll need the skill to know when to time and where to direct your overhand and underhand shots.

Chambara is basically this game’s version of Swordplay from Wii Sports Resort, requiring you to knock your opponent out of the ring to gain points. You can choose one of three weapon types, the sword, which deals the best base knockback, the charged sword, which increases base knockback by successfully blocking strikes, and the twin sword, which lets you spin block and strike with both swords, as well as spin like Link would with his spinning slash. The controls are quite clever, as you will need to position your sword correctly to successfully block and attack the opposition. Last, but certainly not least is Bowling, arguably the most popular activity of Wii Sports. 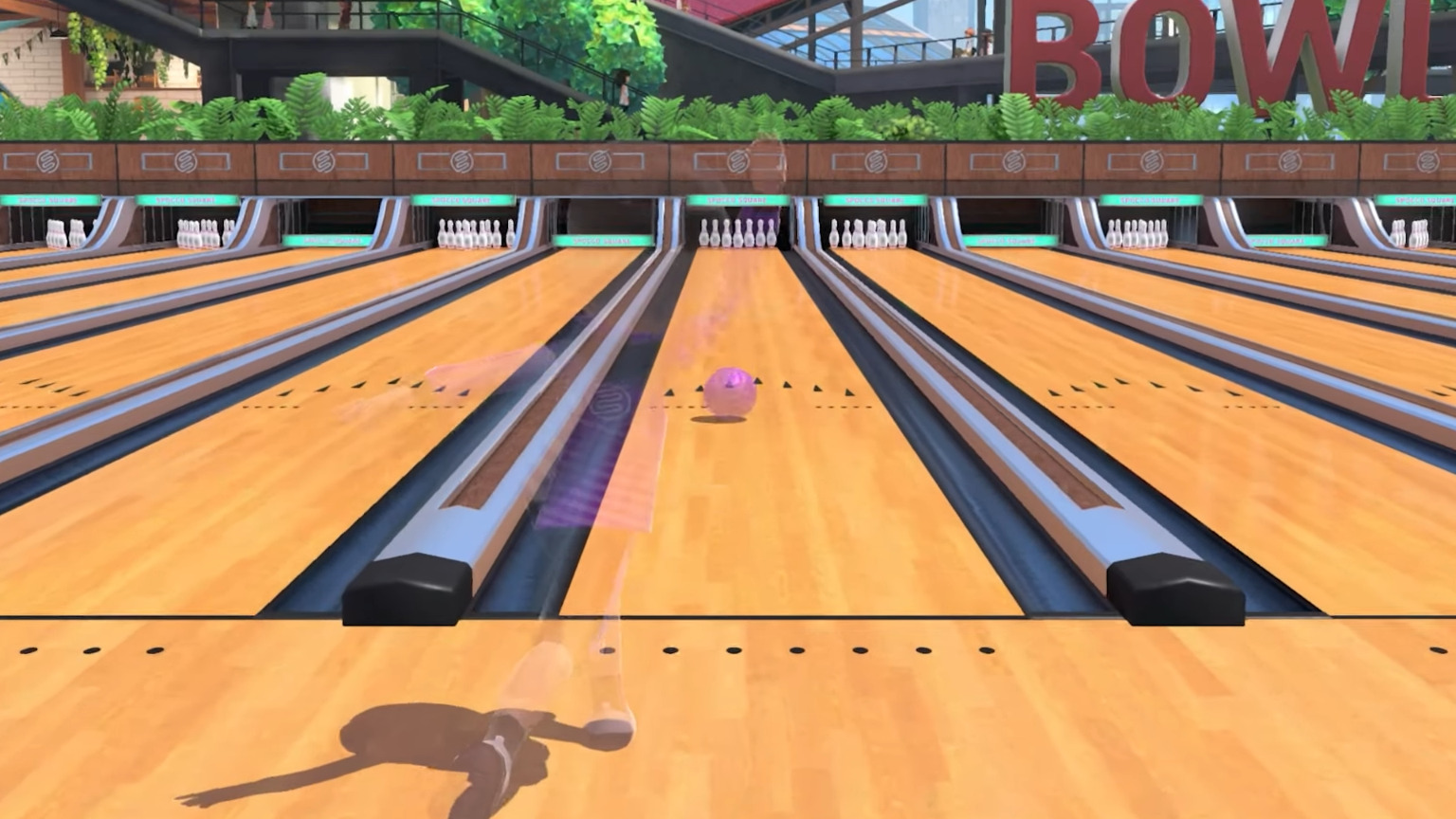 And it’s just as good as the original. As you continue to improve, you’ll quickly notice that this mode leaves little room for failure though. In just less than an hour, I was able to get consecutive strikes using the same methods. That doesn’t change the fact that it’s a great way to pass the time with friends and family, owing to its simple gameplay. The same can’t be said for the special lane, a mode that includes obstacles to the bowling lane. This added layer of complexity is what makes bowling my favorite mode in Nintendo Switch Sports, and maybe even the main reason to play this game in the first place. This brings me to my next point: this game can get old really fast in a single-player.

If you have no one to play with and don’t want to purchase a Nintendo Switch Online Subscription, I honestly can’t recommend this game. Getting players to purchase an online subscription is the not-so-subtle part of this game’s marketing strategy after all, as evidenced by the inability to obtain new clothing options without playing online. That said, while it’s not the must-have title Wii Sports was, if you’re a more casual gamer and want to play online or offline with friends, then Nintendo Switch Sports is absolutely worth a buy.

What do you guys think? I’m curious to know what your favorite sport is in Switch Sports. Let us know in the comment section below, we really wanna hear from you. And as always,, stay with us at Electronic First, where we give you reviews, guides, and hands-on gameplay. Also, be sure to check out our Discord server. We are a community of passionate gamers who love to discuss the latest and upcoming games. This is Arihead, signing out!