Hey everyone, I’m Arihead from Electronic First and I’m very happy to be here with you today.  In our last Worth a Buy episode, I talked about the pros and cons of Pokemon Legends: Arceus. So if you haven’t watched that episode, I suggest you view it after this article, so you can see my honest and unbiased review.

As you’ve all probably heard, Pokémon Legends Arceus has been out for a couple of days now and although it may not be perfect, many trainers have been thoroughly enjoying the game. After all, who doesn’t love Pokémon! I’ve been gleefully playing for many hours now , and I realize that in hindsight, there’s a lot I should have done differently. So this time around, I’ll be talking about the 10 things I wish I knew when starting Pokémon Legends Arceus! Before we begin though, be sure to check out our website, where we give you the best video games at the best prices.

I know the story of Legends Arceus is actually quite interesting, but I’ll try not to get into it, although there’s a bit of spoilery stuff mentioned here and there, so please keep that in mind when watching the video. So let’s jump right into it, shall we? 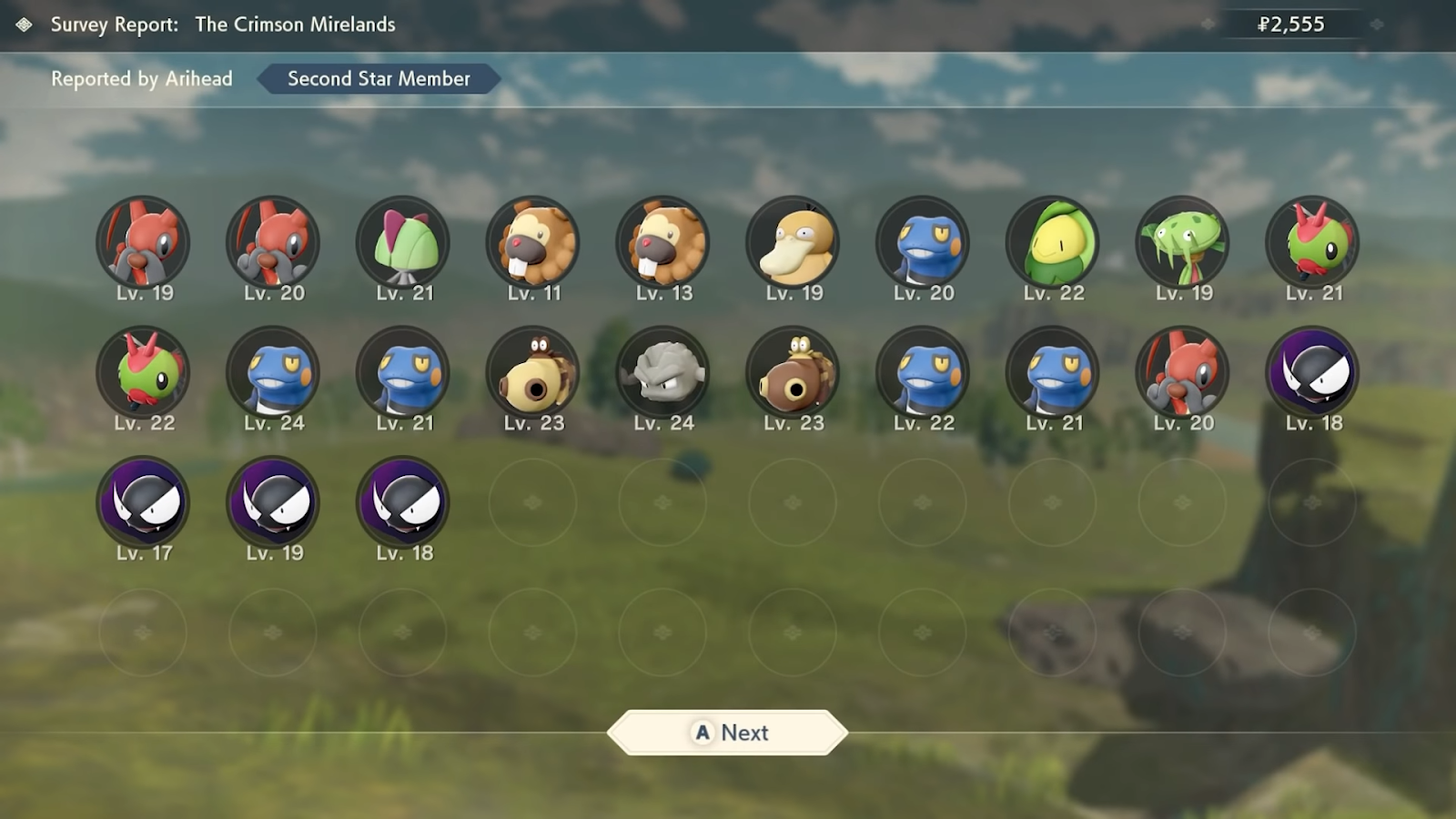 Catching Pokémon is absolutely what this game is about. especially early on, where you should be catching as many Pokemon as possible. Most research tasks involve catching Pokémon repeatedly, which means you’ll have to use a large portion of your resources for buying and crafting a crazy amount of Pokeballs. Mastering the art of throwing Pokeballs is also a given and will help you breeze through the game. Personally, what I did was stock up on a lot of Pokeballs, caught everything in sight and reported my findings to earn money and stock up even more Pokeballs in order to catch more Pokémon… you get the picture. However, you should also try and explore every area’s nook and cranny. Some Pokémon can only be caught in certain zones and you can even find rare ones in Space Time Distortions.

Which brings us to number 2, Space Time Distortions 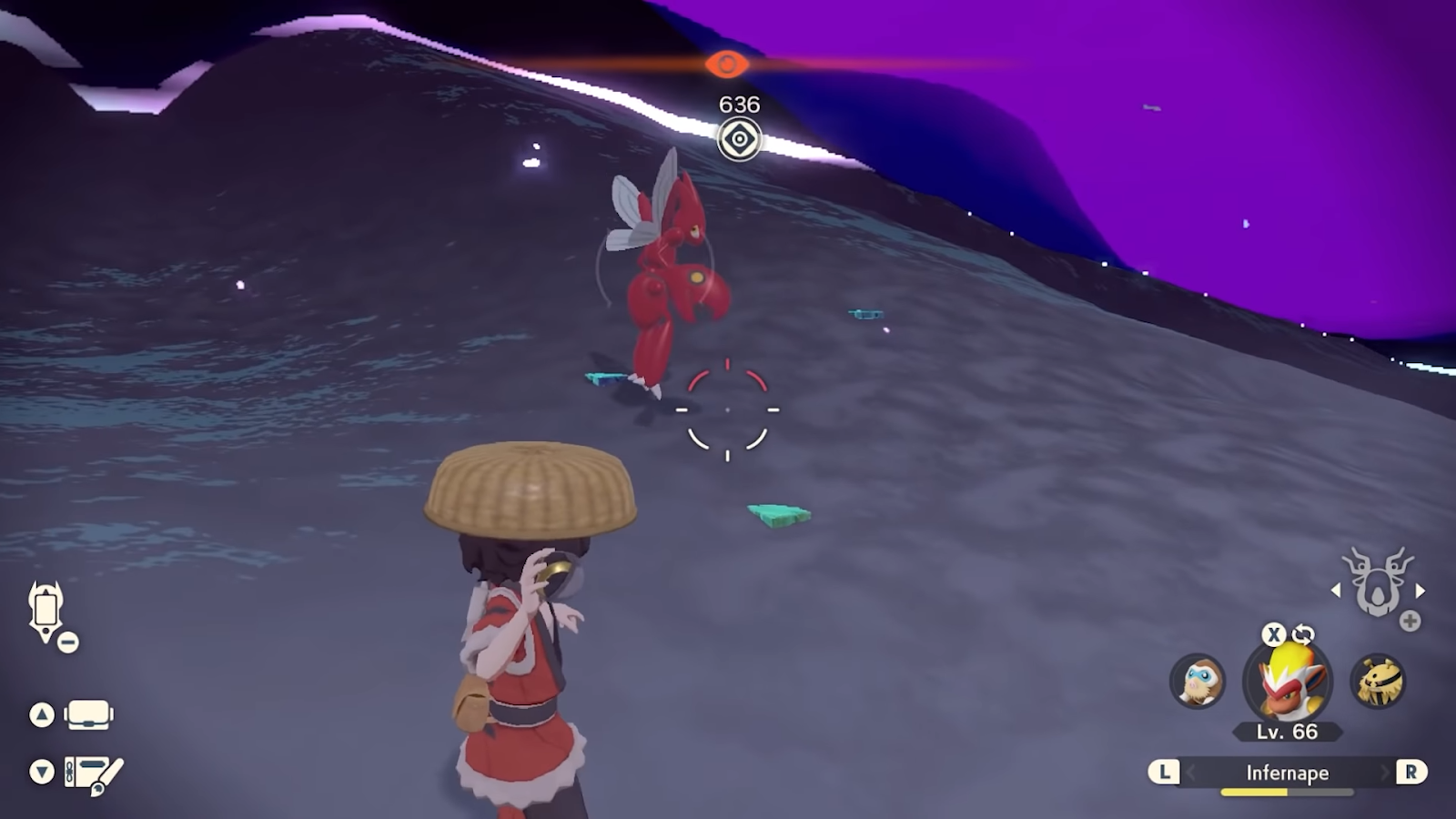 Space Time Distortions are a strange phenomenon that only occurs after you reach Star Rank 2. They’re these weird bubble-shaped zones and are quite easy to spot. You’ll know when there’s a Space Time Distortion, as the game conveniently notifies you when one begins to manifest. What it doesn’t tell you is how to find them and that they take five minutes to form. It certainly took a while for me to realize they can be found marked on the map. Plenty of rare Pokémon and items will spawn inside the distortion, so make sure you have enough Pokeballs and bag space to collect everything you need. Catching Pokémon can be a little hard though, as they seem to spawn and disappear randomly all around the area. They can even appear right in front of you, which happened to me when literally 3 Magmars materialized right in front of me, which was a little overwhelming at first. Normally, you’ll be forced to engage in battle, but certain items can make catching these rare Pokémon a lot easier. Venturing inside Distortions can reap you great rewards, so I highly recommend trying it out. 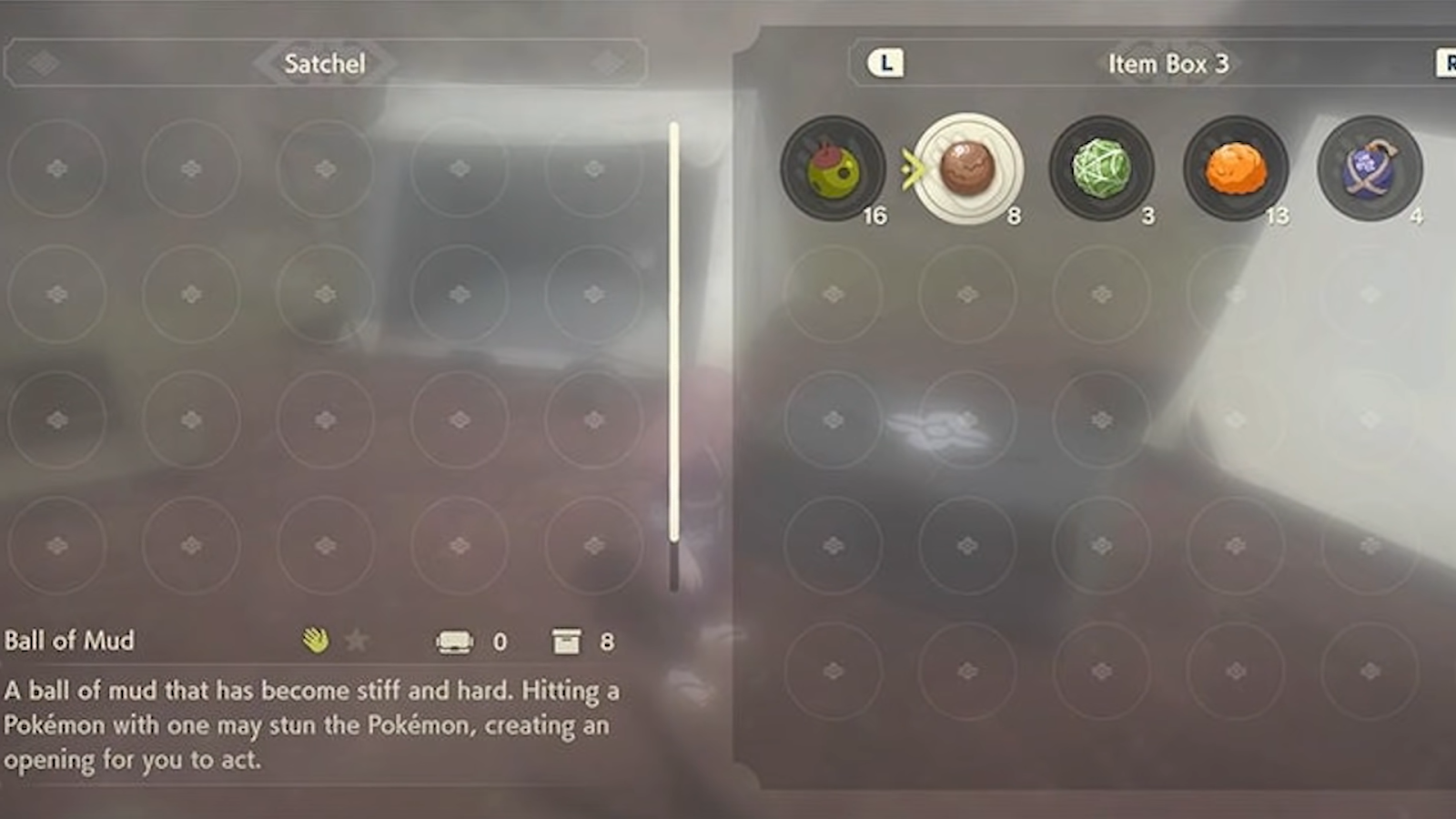 Now I know a lot of you are annoyed with the detection mechanics of this game. Certain Pokémon, such as Staravia seem to be able to detect you no matter how stealthy you are. The only exception is when there’s a patch of grass you can use to remain undetected, but in general, there is little you can do to evade the inquisitive eyes of the Staravia, Golbat and other Pokémon. Enter: Mud Ball, Spoiled Apricorns and Sticky Globs. You can throw these things to stun enraged wild Pokémon, presenting you the perfect opportunity to catch them. This also works super well in the Space Time Distortions, as they seem to be capable of spawning everywhere as I mentioned previously. Just throw these things, stun them and catch them. It’s truly that easy. Regrettably, I learned about this until only recently, otherwise those Magmars would instead forever be living in Pasture 5.

Number 4, Use the storage box and upgrade your Satchel’s inventory space There’s a variety of things you can collect in Pokémon Legends Arceus, and unlike other games, you start with a rather lackluster storage capacity. I recommend dumping all the items you don’t need in combat or exploration into your storage box, which can be accessed near the Jubilife Village gate or the many camps throughout the Hisuian region. The inventory space conundrum was one of my pet peeves. That is, until I realized the rather modest satchel’s inventory space can be vastly expanded! Just talk to this guy, aptly named Baggin, to expand your Satchel’s capacity. The initial fee is 500 and gets more and more expensive as you continue upgrading it. You’ll definitely need a lot of money to make a sizable difference, and it may not always be the best way to spend your money, especially at the early stages of the game. At some point, you might feel like you’re being scammed, as the fee maxes out at 1 million on the 37th expansion. Baggin is certainly a good name for this NPC, maybe in more ways than one.

Number 5, know what each style does and when to use them Pokémon Legends Arceus has given us many new and intuitive features, and some are not so easily understood. Knowing when to use Agile, Strong or normal moves requires some level of game knowledge; specifically, the speed stat of both your Pokémon and your opponent. With the inclusion of Action Order, Pokémon can potentially have multiple turns consecutively. This mechanic is still being researched, but what we do know is that the Agile style weakens, lowers your accuracy and presumably lowers the target’s turn order, while the Strong style does the exact opposite. There are advantages in both styles, as well as using no style as all. In general, I like to use the Agile Style to use multiple turns consecutively and the Strong Style to one hit KO opposing Pokémon. Be careful though, as both styles use up 2 pp each time. For better or worse, Action Order is a big part of this combat system, one you should probably familiarize yourself with. 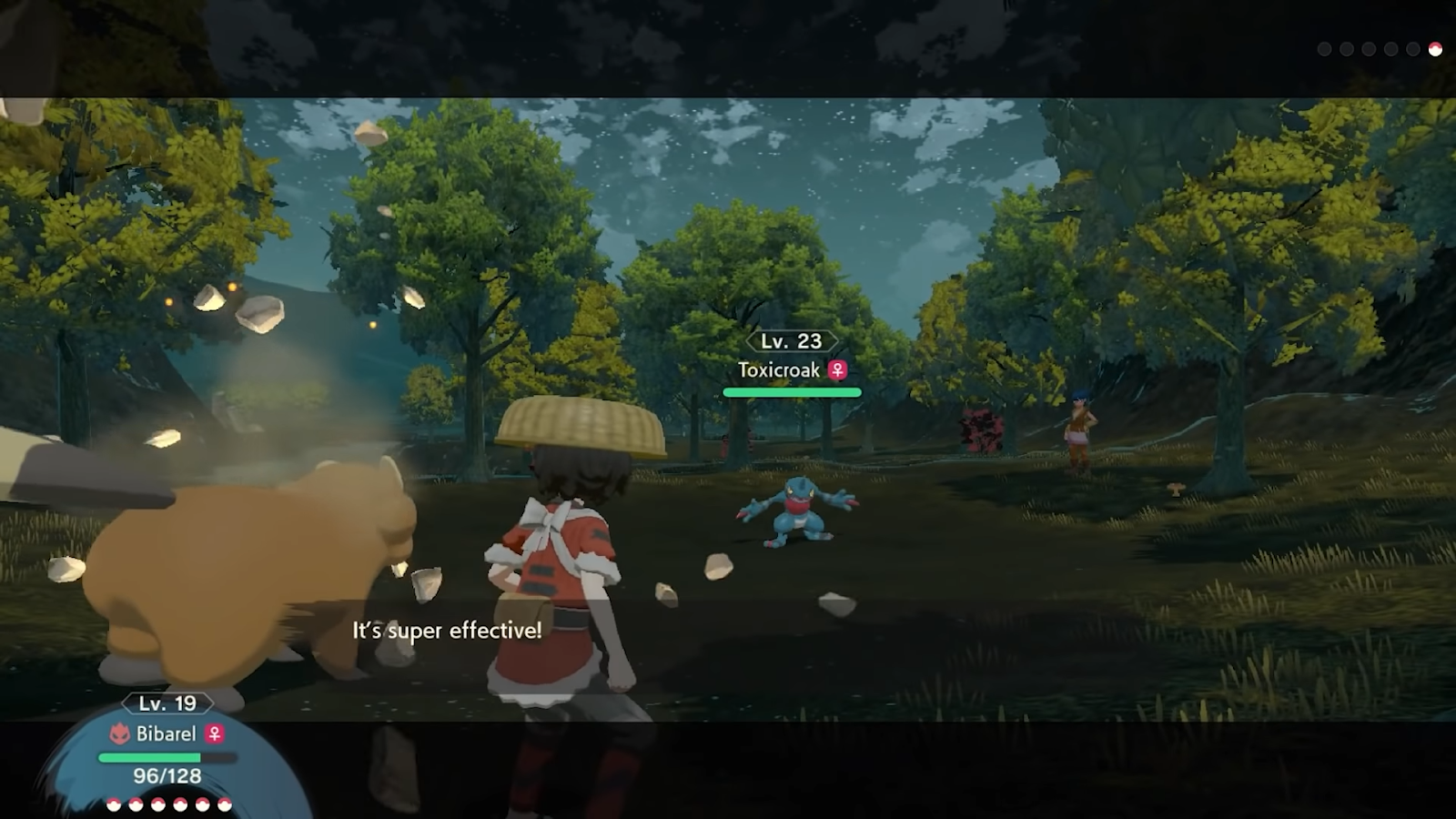 Of course, this wouldn’t be a Pokémon video without these 3 magic words, COVER YOUR WEAKNESSES, which have been spread since time immemorial. I mean let’s face it, this is one of the first things that come to mind when advising newcomers in Pokémon. Now I know Legends Arceus is very different in many ways, but weakness coverage is no less essential and is an important aspect when building your team. This is especially true when preparing for the many zones you can visit in the Hisuian region. Stacking weaknesses can make certain enemies troublesome, while stacking resistances can lessen the value of a Pokémon’s role in your team. Have a big ice problem? Get a Pokémon that is resistant to Ice, such as Bibarel to cover your weakness. I’ve only scratched the surface of team building in Pokémon Legends Arceus. However, sophisticated team building may not be necessary until they release the PvP content we are all hoping for. Legends Arceus is not a particularly hard game. We all have our favorites and with enough investment, you can pretty much use whatever Pokémon you enjoy, regardless of their value in battle.

Number 7, use the Move Tutor 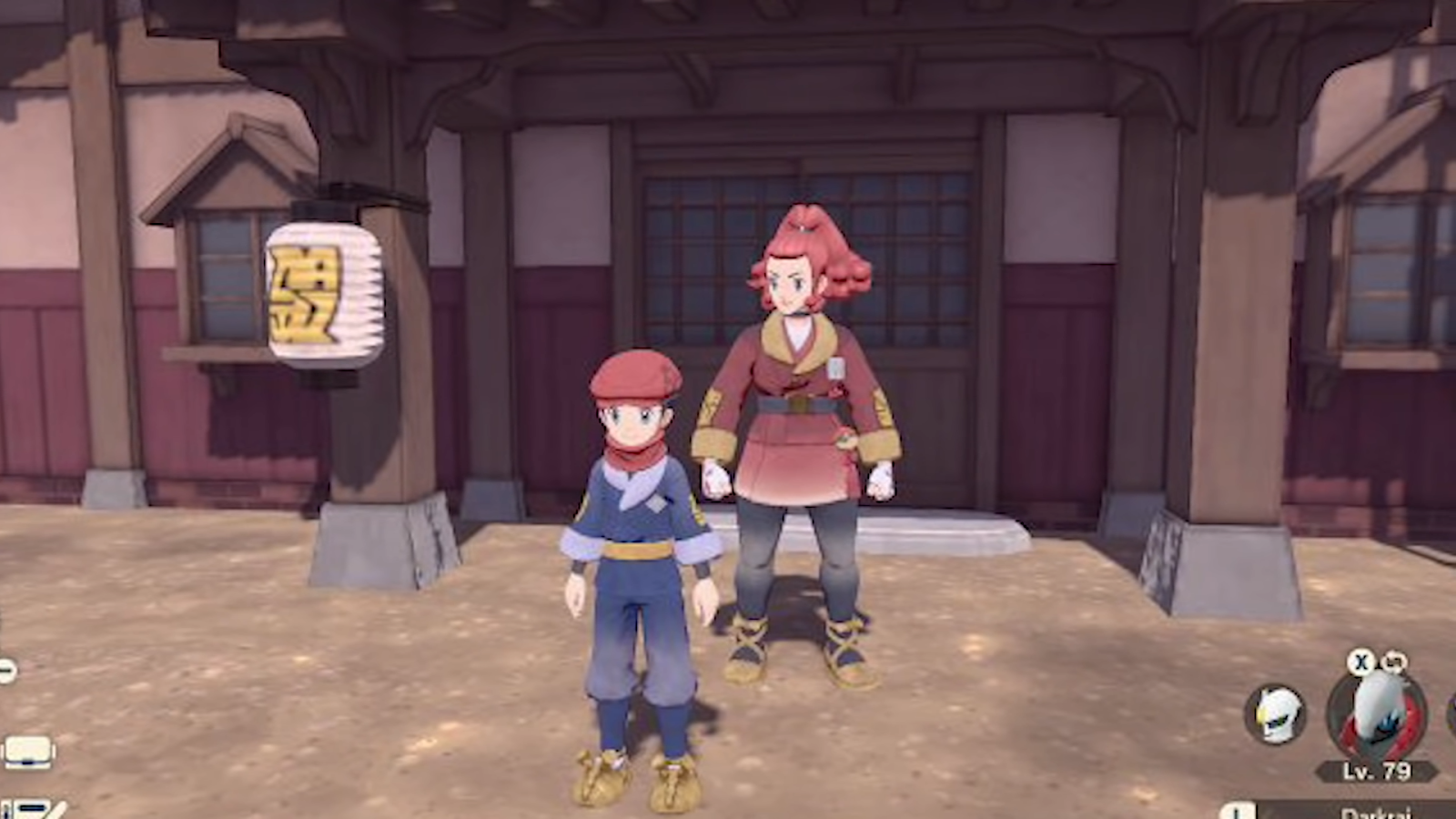 In Legends Arceus, Pokémon can equip moves like you would equip skills in other games, which gives the player a lot more options for their Pokémon. However, your Pokémon have much to gain from the move tutor. You can find the Move Tutor Zisu in the Training Grounds at Jubilife Village, which can also be accessed through fast travel. Some moves might cost a hefty penny, but can considerably improve your Pokémon’s combat viability. For example, I taught many of my Pokémon Stealth Rock, a cheap but strong option for the common Flying and Bug Pokémon found all around Hisui. It’s not the infamous Stealth Rock some of us are accustomed to, but is nonetheless quite useful, especially at the early stages of the game.

Number 8, buy recipes from the Craftworks This might be a bit embarrassing, but I completed the game before realizing you could buy recipes to craft more items. If you’re into crafting, you should head over to the Craftworks Shop in Jubilife Village, which is located next to the Wallflower. There are a lot of useful recipes sold there, such as the Sticky Glob, Max Revive and Scatter Bang, so don’t make the same dumb mistake I did and remember to check out the shop and buy the recipes you need, whether it’s for the Max Revive, which can be used to heal a fainted Pokémon, or the many items you can use out in the field. You’ll need shards and a lot of money to buy these recipes, so remember to spend your resources wisely. Enraged Noble Pokémon are a great feature and highlights some of the game’s most exciting moments. You fight against the Noble Pokemon and eventually, you’ll be notified to send out your Pokemon to engage them in battle to more easily quell these golden monsters. However, like I said in our Legends Arceus Worth a Buy episode, you don’t actually have to fight them. That’s right, you can just hurl balms at it until the enraged Noble is successfully quelled. A few of these fights can be more tedious than others, like against the mighty Avalugg. I especially had a hard time versus the Electrode, which was even more difficult, as I refused to engage in battle against it with my admittedly higher-leveled Pokémon. Knowing this is especially useful when your Pokémon are under-leveled and possibly bear a poor matchup. Not to mention, it’s definitely really fun and exciting to hurl balms at these enraged creatures without intermission. Actually, I struggle to see how this is supposed to quell them. I mean, wouldn’t you get even more enraged if someone threw like a million balms at you? I know I would! 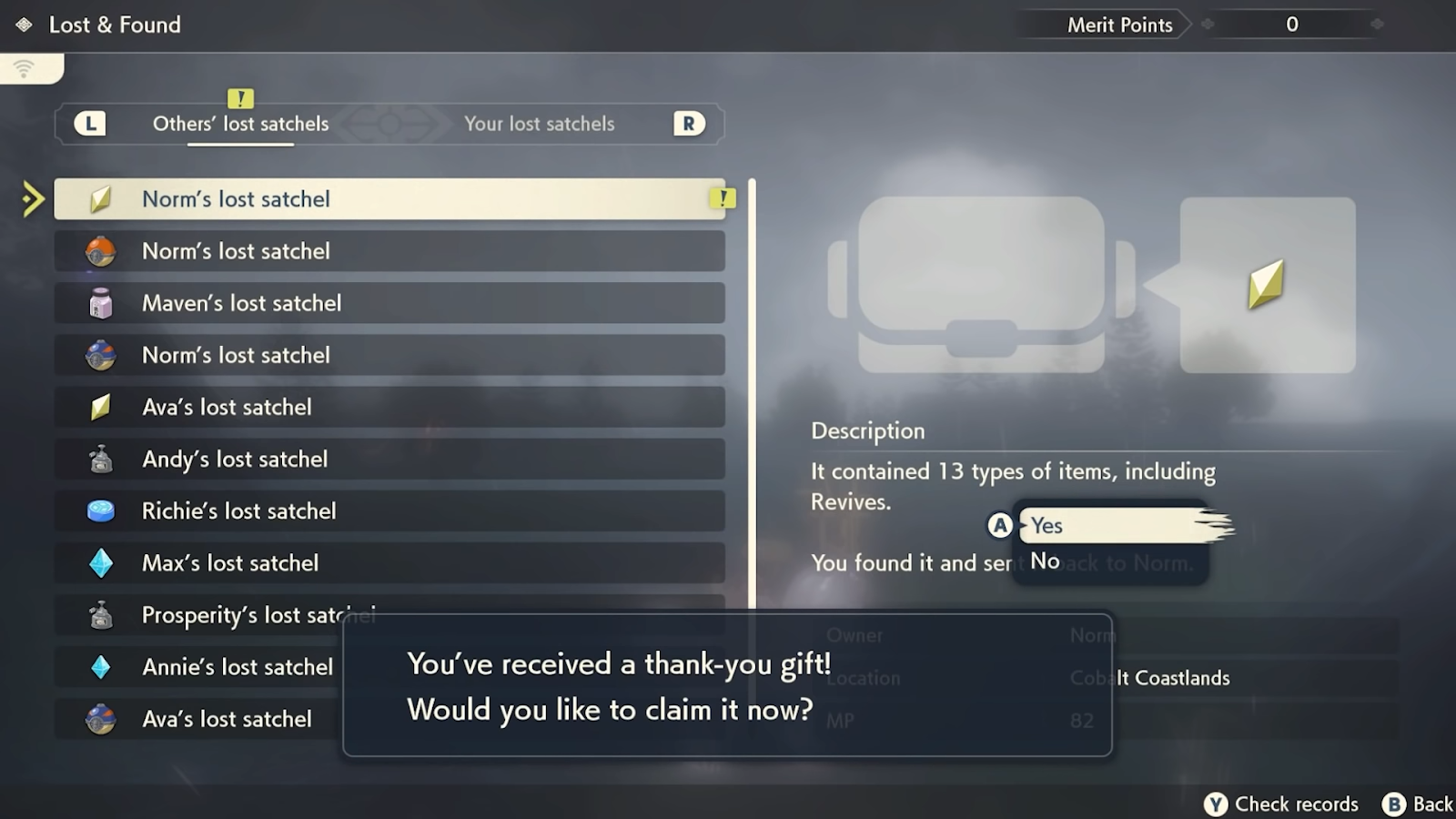 You unlock the game’s Online Connectivity features when you finally make it to the fifth story quest. That’s when Simona’s Item Exchange stand appears, a shop where you can trade Merit Points for many useful items that can normally only be obtained as drops in Space Time Distortions. But how do you get Merit Points anyway? If you’re connected to the Internet and faint, you’ll leave behind a satchel, which can be found by other Trainers for Merit Points and other rewards. Likewise, you can go out and hunt down these bags, which are scattered all around the region. If you amass enough points, you can redeem rare items, some of which can be used to evolve select Pokémon, such as Eeevee, Rhydon and Scyther.

Now remember, some of the game’s mechanics are not fully understood yet, like Action Order, Space Time Distortion drop rates and other features, which I have not yet fully explored. So to sum things up, these are just the 10 things I wish I knew when starting Pokémon Legends Arceus. I’m sure there’s a great many intriguing discoveries just waiting to be unlocked and I really wanna hear what you guys think about this list. The game is still pretty new, so I’m sure many of you have your own interesting discoveries to share. This is Arihead, catch me here at Electronic First, where we give you info on the latest and upcoming games. Stay tuned for our future videos and articles. Smell ya later! 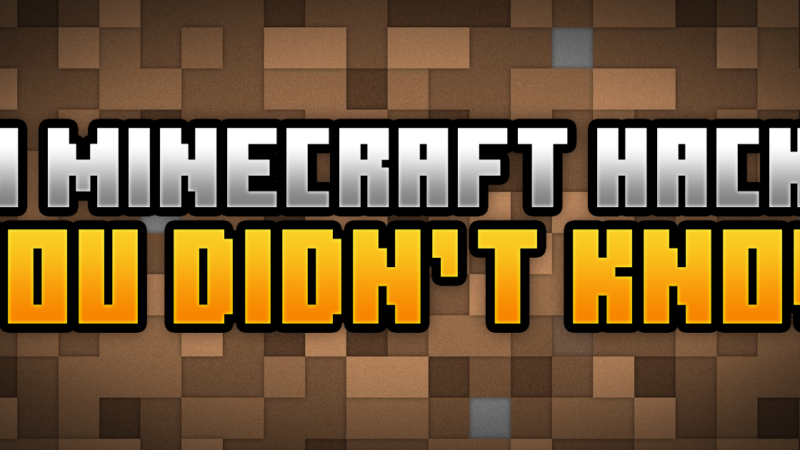 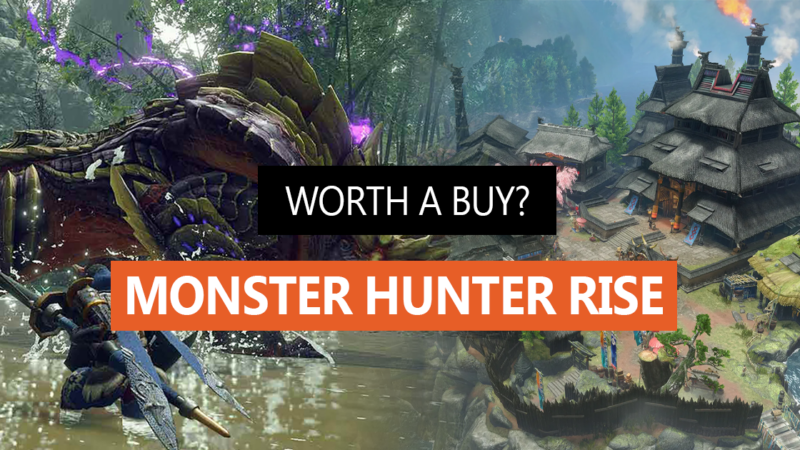