The Nintendo Switch has been a remarkable success through the following years and a large part of it is representing the franchise. From the whole era of Super Mario and Zelda games and more previously the adventures of 2D and a little bit of 3D games. But now a full-fledged three-dimensional mainline escapade has arrived.

Most of the Nintendo games have already transitioned from 2D to 3D like Mario, Zelda, and Link. But the Kirby character game has been in 2D for over 30 years and those who have played their earlier series now can claim that this is a big idea, Kirby needed a Bold Change.

Kirby games have been improving since their first make and this game Kirby and the Forgotten Land can be a celebration of a whopping 30 years of 2D and 2.5D adventures. And what can you expect from a little pink puffball?

Kirby and the Forgotten Land is specifically for younger gamers. It’s not difficult to play, it’s not as challenging, and it won’t leave you scratching your head over the riddles, but what’s here is tremendously lovable and extremely re-playable even for those of us who are a little older or significantly older than the target audience.

So what can be the factors which count this game as their success? Let’s talk about it now.

The game starts with Kirby and his Waddle Dee companions which were sucked and dragged into a rift in the sky to another unfamiliar land that is mysterious and abandoned in its look and that is what the title of the game implies. Waddle Dee is kidnapped by the beast pack and Kirby goes to free them by searching and fighting the enemies who are adorable in their ways.

So basically the enemies that Kirby fights are a fox-like creature, Awoofy, Strong-Armed Beast Gorimondo, and a beautiful lethal leopard Clawroline. To stop and rescue his friends, Kirby partners up with Alphalin, turquoise looking with giant ears, and sets off to suck up things and steal abilities like Kirby always does. The good thing is Kirby is constantly put in a situation where sucking up enemies is a useful ability otherwise he is just a fluffy ball.

It’s not an open-world game however it’s splits up into linear levels like previous platforming Kirby adventure. Each stage is a 3D environment with hidden waddle Dees to discover and optional hidden objectives and some of these stages include boss fights like the two characters I mentioned before. You will collect capsules toys and star coins. Capsule toys are just fun collectibles and star coins that you will use in Waddle Dee town.

To get level to level there is an over-world map where you can use Warp stars to fly around and on top of main levels, there are also treasure road levels. A sort of race to the finish style mini-game where you are given a specific copy ability to try and beat the level as fast as possible beating the time. Beating the levels mainly rewards you with rare stones which can also be in Waddle Dee Town.

One of the brand new abilities in Forgotten land is Mouthful Mode where you can suck up any object and take advantage of its abilities. Some abilities are Car Mouth which turns Kirby into a car for faster movement and runs into the enemies.

Vending Mouth transforms Kirby into a vending machine, allowing him to shoot cans at enemies. Cone Mouth allows Kirby to slam into objects by using the cone’s pointed side. The Scissor Mouth elevates Kirby to reach higher locations. Ring Mouth generates wind gusts that can propel boats across the water or spin fans.

Light Bulb Mouth which can illuminate dark areas. Arch Mouth turns Kirby into a paraglider and allows him to fly. There is even a Water Balloon Mouth that fills Kirby with water used to spray enemies or clean up. Stair Mouth, Pipe Mouth, and Dome Mouth are also the shapes it turns into and a lot more in the game which cannot be listed here before the release.

On top of that, there is also a copy ability Kirby has like a sword, bomb, tornado, fire. However, in forgotten land you can now even evolve copy abilities for example fire ability can be evolved into a volcano to dragon fire and can get dragon wing and fly around and throw flames.

Similar abilities Kirby possesses include Clutter Needle, Gigant Sword, Noble Ranger, Frosty Ice, Toy Hammer, Drill, Ranger that fires bullets, and likely many more that we have only seen snippets of in the trailer. You can evolve the copy ability in the weapon shop in Waddle Dee Town by finding blueprints at each level.

Besides the weapon category for evolving copy abilities, there are plenty of other kinds of stuff to do as well in the Waddle Dee Town like eating, shopping, fishing, working at a restaurant, collecting capsule toys, and even watching cutscenes.

Speaking of Waddle Dees and Waddle Dee Town, the game also includes a two-player co-op mode with a second player where the second player can play as Bandana Waddle Dee. This ability is available very early on in a game after the intro level. So, in many other switch games, you can share the joy and pass a joy-con to a friend.

There are also two different difficulty modes, spring breeze mode, and wild mode. Spring Breeze mode is simple to play and it’s a perfect model for players who are into action games. While mode claims to be a bit more challenging while also giving you more star coin rewards. You can change the difficulty options at any time.

Kirby and the Forgotten Land amiibo

Kirby and the Forgotten Land does not have any planned DLC at the moment. Let’s talk about the game amiibo support which is kind of the physical equivalent of the DLC. There are many new Kirby amiibo throughout the years compatible with the game including the Smash Bros and Kirby versions of Kirby Meta Knight and as well as the Waddle Dee Amiibo and the QB Amiibo.

The following amiibo are compatible with Kirby and the Forgotten Land:

Kirby – you receive a large number of coins as well as a power-up.

Waddle Dee – you gain a lot of coins and a health boost.

King Dedede — You receive a massive health power-up as well as a large amount of cash.

Meta Knight – you receive a large number of coins as well as a health boost.

Kirby (Smash Bros) – you receive coins and a health boost.

How do I use Kirby and the Forgotten Land Amiibo?

Entering a stage, pausing, and selecting amiibo from the menu will allow you to use Kirby and the Forgotten Land amiibo. After that, simply scan your amiibo and you’ll be able to enjoy your in-game bonuses.

The visual mods of this game all depend on the display quality of the Nintendo Platform. A bright Cartoonish style is present in the game. It can surely feel appealing to the children. Every stage level in the game is full with great soft details with lush sceneries. Even the enemies are crafted carefully.

Kirby and the Forgotten Land offers tremendous animation. Such as the dodge mechanic is present in the game and the cartwheel acrobatically inflating his body to hover in the air and when he comes to the ground you will notice him sweating.

Kirby and the Forgotten Land will be exclusive to Nintendo Switch. It will work on all Nintendo switch models whether you have the original switch-like or the OLED model. But unless you have a separate pair of joy-cons you are unable to gain the advantage of the two-player co-op on the switch light. The reason is that the controllers are attached to that system.

Another top reason behind the predicted success is the easy accessibility of the game to everyone. The game runs smoothly on Nintendo Switch. It can handle this game easily. But that does not mean that the game has low-quality graphics or poor content. The game stands out with its gameplay mechanics and its clean graphics. Moreover, the game will soon be available to play on other gaming consoles soon as well.

Kirby and the Forgotten Land launches on 25th March for $59.99. It will be available physically in stores as well as on the Nintendo e-shop. Also, there is a demo available to download right now for free on the intended e-shop that includes three stages in the first world if you are looking to try the game for yourself before buying.

Kirby and the Forgotten Land successfully warps the series’ already a fun mix of ability-based combat, platforming, and secret hunting into the 3D dimensions. The predefined setting and camera angles may not be as thematically interesting as the previous game versions, but it is still lovely and vibrant, with cleverly designed levels that make consistently smart use of Kirby’s abilities. Undoubtedly, you will see a change of perspective in Forgotten Land that maintains most of what players love about classic Kirby games. If the future means more 3D adventures for that hungry pink hero, players would be more than happy to swallow them up.

Kirby and the Forgotten Land is a delightful game with endearing characters, amusing moments, and vibrant level designs for an adventure that will give you a sugar rush. There isn’t much challenge here for mature gamers. The game lacks the level of other 3D platforming games like Super Mario Odyssey and Ratchet & Clank. The versatile and creative nature of the game allows players to shape their own gameplay just as per their wishes.

Despite this, the fun remains high thanks to the copy ability and transformations, and there’s a lot of intriguing stuff beyond credits. Still a great 3D platformer for young gamers starting and older individuals looking for a good time.

Combining everything, the versatility, creativity, endless fun, community aspects, and easy accessibility, make this game a wonderful game that is indeed going to be a huge success. Even though every year hundreds of new competitive games are released, this incredible-looking game is going to grab the attention of thousands. 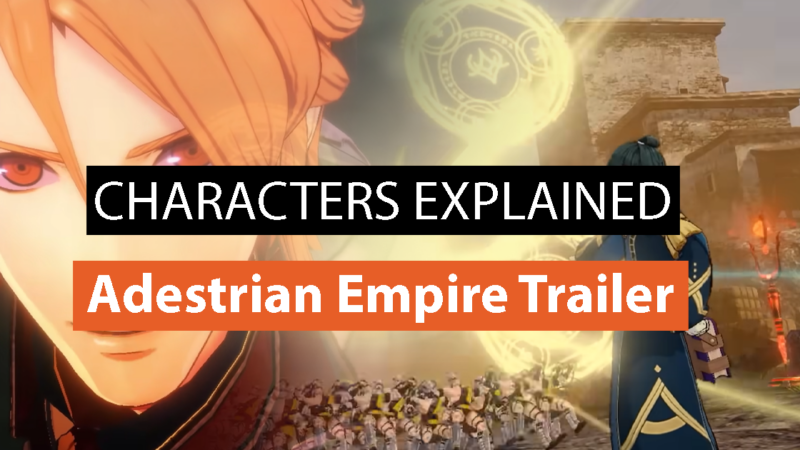 All the Characters Seen in the Adestrian Empire Trailer Explained
July 19, 2022